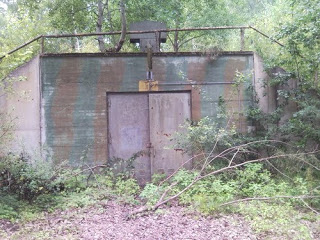 I was looking on Google Earth the other day, searching for 1st Brigade Headquarters for the 3rd Armored Division when I found this. If it’s not the same one I have a picture of from 1971 it’s close enough. My old photo has a real character standing on top. If I told what was in those bunkers they would come looking for me and I suppose it wouldn’t be hard to find me in any case. There was a shootout one night while my aforementioned buddy and I were 30 miles away getting drunk on sloe gin. It really is a good story though.

Daryl and I had just returned from hauling 17 new guys in from replacement headquarters in Frankfurt. They were quite tired and bunked down in the north end of the upper (3rd) floor of B and C Battery of the 2/3 Artillery. I had a very loud surround sound audio setup with 4 channel reel – reel and big Pioneer speakers. After the first few bottles of sloe gin disappeared Daryl and I packed the amp, two speakers and the reel to reel with Jan and Dean’s Drag City prepped for another running start. That evening was the first time I ever turned the amp over the halfway mark. At about 6 on the dial the wall lockers started rocking back and forth then at 7 the windows directly across the room shattered. At 8 the remainder of them were in pieces, too. Daryl and I laughed as guys were failing out of bunks and running for their lives.

The officer of the day at Brigade Headquarters a couple of blocks away wasn’t laughing though. I guess they could hear it all the way up the parade field and over in the tanker’s barracks, too. Anyway, the MPs came in, confiscated my equipment and handcuffed us. We went over to the guard house waiting for who knows what. But an ambulance pulled up with the third co-conspirator in this fiasco.

We had a fairly new guy from Baltimore whose name I cannot remember today but after what he had just pulled of we gave him a real nickname: Flash! He said he was having a flashback and I still believe him. About 200 yards past the last bunker on the upper level of three roads was a guard shack with a functioning street light right overhead. We had communications wired into the shack from three places among the bunkers and the last bunker had one right in front of it. I guess Flash had nothing better to do while Daryl and I were harassing the troops so he rang the phone to the guard shack and told Lt. Gray there were 8 guys in black clothes and ski masks standing on the bunker. As soon as Lt. Gray stepped out of the shack under the light, Flash emptied the 14 rounds out of his M-16 right over Gray’s head (and not much more than over according to Lt. Gray). Lt. Gray said he had no clue what was going on but but figured he might as well shoot back with his .45 so he fired off 7 or 8 rounds until Flash surrendered.

Flash got locked up and the ambulance that brought him back hauled us two drunks to the bunker site to sleep it off. Gray was still pretty excited when we got there about 2 or 3 in the morning but he was also quite ticked off at me. Daryl chose to pull K.P. for the remainder of the week and I had to fill in for Flash on his appointed rounds guarding those bunkers.
I don’t know to this day how many other people know what was in those bunkers but I do know that Lt. Gray wasn’t going down without a fight guarding them. Flash recuperated well enough to go on a road trip with me into the first few hundred yards of The Netherlands three times in one day me. We were deported twice and chased out by a bull in the dark the last time.