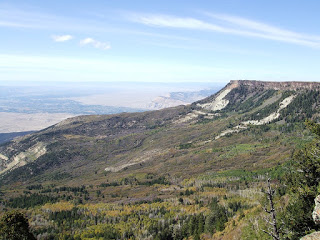 Or At Wit’s End

Help! This picture is called Land’s End. It was taken from the old lodge atop Grand Mesa in western Colorado. That is the Grand Valley below with the Bookcliffs trailing off the the west into Utah and the Colorado River crossing the valley into eastern Utah just south of Interstate 70.

So what does any of this have to do with the United States Department of Uneducation? I am so glad you asked because I am going to do more than tell you. I am going to show you how the cow ate the cabbage.


I do not consider myself a well-educated-man but some may say differently. There is always a lame-brained bureaucrat sitting at Starbucks dreaming up other names for me and my ilk. It is to that bureaucrat I wish to raise my voice and opinion.

The Unsubsidized Loan was was paid in 1994.

The Perkins is being held hostage by The Department of Education for $32.33 for the which FMS removes $140.55 from my SSDI every month offsetting my HUD and raising my rent by that same amount plus I am paying off a $2000 loan from my credit union to reimburse HUD for that same amount for the 2 (two) years prior which FMS removed those funds to offset the 2 (two) Stafford Loans as shown above for the which I only received the first disbursement of $1250 and the remainder was left at Mesa State College when I dropped out of school in the winter of 1994 at the beginning of my current physical disability.
The Perkins loan (I find out now from Debt Management) has $32.33 remaining to be paid. When I contacted College Assist last winter, after my last hospital stay, I was told where and how to find and file a Discharge Application for Total and Permanent Disability. In late November I received College Assist’s Conditional Approval, dated 11/22/11 on the FFEL and Perkins loans. It took four mailings to finally report the physicians certification but Nelnet returned my original with a letter telling me they will be assisting The Department of Education in reviewing my disabling condition.
Attached to the back of my returned discharge application is a Nelnet memo dated 03/04/11 for the Guarantor to copy, sign and fax to the Specialty Claims Department of Nelnet. The Account # is xxxxxxxxxx and the document is the default Total and Permanent Disability claim originally filed on 7/24/08.
I called Nelnet Guarantors first to ask what I needed to do and they said it would take time to process the discharge but after another call found out that Debt Management will not accept the discharge application because they have to use their own forms and will have to get my doctor to submit another report. When I told them I already have the completed forms they said again they would not accept them because they are different. I was told it could take 4-6 weeks for the forms to be mailed. Tuesday last I called back and talked to a person named Dana who said the same thing. Her main comment was, however, rather disturbing to my senses. She said they could do nothing until I either paid off the loan or reapplied through them to discharge the loan for permanent and total disability. I asked again what it was going to take to straighten out this whole mess and she gave the best answer I have heard so far in my short 60 years on this earth. Why don’t you just pay the $32.33, she asked!
Is there anyone else on this planet who might assist me for a second with the stupidest question I will ever ask in my lifetime? How long is the Department of the Treasury going to keep taking $140.55 each month to pay off that $32.33? Hey! Come on man, how long? I have, sitting in my formerly nicotine stained fingers right now, receipts totaling over $8,900 that has been confiscated by the Department of Education (what an oxymoron) since 1996 up to 12/03/11! Want me to put pictures of them here? And that doesn’t count my State and Federal tax refunds!

Someone please tell me where it is!

I finally got an address to mail the payment to and figured I’ve waited almost 15 years, what difference is another month going to make? Maybe the head honcho down there in Alabama or Georgia or Washington D.C. or wherever, has had a long enough vacation on my dime to come back in and quit making me subsidize this broken bureaucracy with my Social Security. My doctors and I would appreciate it very much.Social Security only took three years to assess the only job I could do even part time is a parking lot attendant. We don’t have much call for them at Land’s End.
So they mailed me the forms which I received Monday. They are the same forms! I think I’ll wait until 2012 and send them the $32.33. Either that or walk off Land’s End.
http://creativecommons.org/images/public/somerights20.png

One thought on “Department of Uneducation”